If you have a limited budget and/or storage space, then there are obvious advantages to collecting smaller model horses – they’re cheaper and require less shelf-room than larger scale ones.  The exact height limit of a “mini” model seems to vary between different groups of modellers, but 3” (7.5cm) or 4” (10cm) to the ears is generally the maximum.

Many people began their collections with Britains models, and the slightly larger range of Breyer Stablemates are also very popular.  Other brands of plastic minis include Timpo, Historex, Airfix, and various 'Hong Kong' plastic moulds, while if you prefer china, there's the Hagen-Renaker mini series. If very tiny models are your thing check out Model Railway horses. In the field of resin casts one finds Iddyl 'Handy Horses' (now discontinued), and the Animal Artistry Mini series, as well as the many Artist Resin and 3D printed models which are now available, although some of these are a bit larger and are moving away from the strict 'minis' scale.  Completist collectors may also wish to try and track down old metal models from Britains and other manufacturers, though this is really moving into the area of Antiques.

Of the makes listed above, probably Stablemates, Artist Resins and Animal Artistry are the best show prospects. For Arabian enthusiasts we can also recommend the Hong Kong mini Arab, a 1 ½" tall copy of a much larger Hartland mould.  The mini version was part of a farm set sold by W H Smith in the 1970's and is worth trying to find at jumble or car boot sales as when repainted it makes a very typey little horse.  It is still available now new in a farm set in cheap gift shops, but the mold quality is not as good.  The Britains range has changed several times and again, unfortunately, the discontinued (1960?s) models were generally the best, but some of the more modern horses can also be shown successfully.

Timpo horses used to be very much action models with Cowboys and Indian riders in imitation of and to the same scale as the Britains Western Range. Both series include some strange positions among the horses but some would be suitable for performance classes. Airfix and Historex are hard polystyrene plastic military models, to the same scale as Breyer Stablemates, but were supplied in kit form for gluing and painting (many are now discontinued).  Like Timpo, they are rather generic models with no particular breed characteristics, but can be generally used as Warmblood types particularly in performance events rather than the elegance of the show ring.

Mini minis is a term sometimes applied to models less than 1" (2.5cm) to the ears, such as the Arab family made by Hagen-Renaker.  Others may be found miscellaneously as toys or as horses for model railway set-ups. Breyer have a range called 'Mini Winnies'.  Some can be very nice, but at this scale some detail is bound to be lost and few of them are serious show prospects.

Mini models can be remodelled, repositioned, painted and haired just like their larger relatives, but in some cases different techniques are required because they are made of different materials.  Older Stablemates are made from Tenite, the same plastic as the larger Breyer models, and can be repositioned by cutting in the relevant places and bending with the aid of hot water in the same way, but the newer Stablemates (1992 onwards) are made from the hard plastic ABS and require a different technique, as ABS will not bend in hot water.  The other plastic makes can also be remodelled, except for Historex. They are normally made of polythene, a plastic which does not accept glue as readily as Breyers, so any joins in a Britains, Hong Kong mini etc., are likely to be fragile.  Polythene is also notoriously difficult to sand or file, although putting the model in a freezer for a while beforehand can help!

If you are put off by the thought of repositioning something so tiny, never fear!  Most minis look a great deal better simply if repainted well, and this can be done in just the same way as with larger models except that obviously, smaller brushes will be useful! 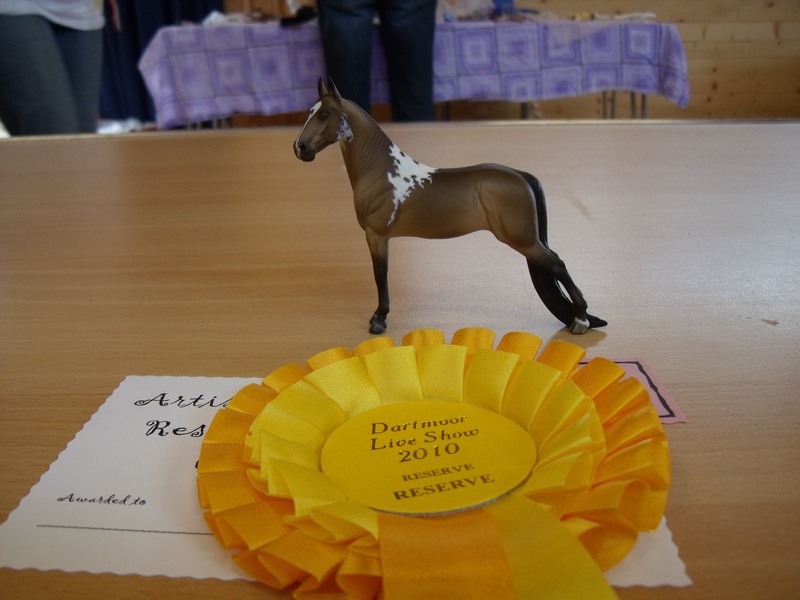 For photographing minis, you will need a camera that can focus to about 1" (2.5cm) away.  A close-up lens is an advantage but not essential - photos can always be enlarged and the edges trimmed to focus attention on the model.  An artificial set, or careful choice of background is advisable - real grass won't look in proportion to a mini! - and anything too fancy could be wasted as when focusing so closely, as only objects which are same distance from the camera as your model will be in sharp focus.  A good set might use a green towel or model railway base sheet as your grass ground, while a white railing or fence made of cocktail sticks behind the horse suggests the show ring or racecourse.  If you have no access to a suitable camera or set, watch out for BECF events or other shows at which someone will have a photography service available, they are held from time to time.

For performance classes at live shows or photo shows you will, of course, require mini tack and riders.  Britains riders are good for any model of the right scale and can be repositioned and customised for any special purpose, such as jockeys, if you wish.  Historex and Airfix riders are the right scale for Stablemates, but they come in kit form and all are soldiers in detailed uniform so will need some remodelling to turn them into normal horse riders.  These two model ranges also include standing figures, some of which with a little work can become ideal show handlers.

Good tack for minis is very difficult to get; what's supplied with or moulded on the horses generally looks rather clumsy, there are tack makers in the hobby that offer small scale work and some who specialise in it.  The remaining options are having a go at making your own, using the thinnest leather you can find, with fine wire for stirrups and small jump-rings for bit rings, or ask another modeller who shows minis in ridden and performance classes if they have time to help out. Some model horse tack making suppliers now make hardware in smaller scales.

Other accessories for mini photos (jumps and other set dressings) are, luckily, easier to come by.  Britains show jumps, gate fences and stone walls look to scale with Britains to Stablemate-sized models, although some are now discontinued.  You can also make your own obstacles from plastic straws, thin wood, etc, suitably repainted.  Most model shops sell small dowels and other wood ideal for this purpose.  A dressage arena - or enough of one to look complete in a photo - and letter markers are easy to make from white card, and all kinds of small odds and ends can be used for gymkhana equipment.

Live shows cause no special problem for mini owners; in fact a whole string of minis is much easier to transport than larger models - The entire show string will probably fit, quite happily, in a shoe box !!   Well-presented or customised minis can often catch the judge's eye and several top show honours have gone to them, so this is a field of the hobby which is well worth a try!

This Information leaflet was originally written by that late Jay Felton. 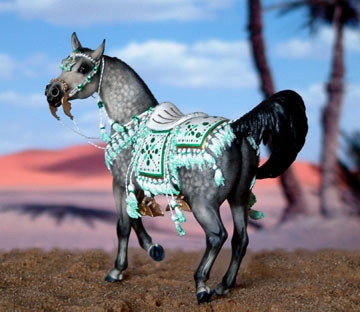 Go onto: Buying Models from Abroad