Guernsey based toy company. In the 1970s they made a sit-on horse made from fibreglass, mounted on springs on the hind feet.   No longer available.

Outdoor rocking horses by Michael Campbell.  They have a wooden log body on a metal head and frame.

77mm white metal kits. There was at least one horse available.  No longer made.

120mm cast models in kit form. They had one horse in the range. No longer made.

Resin models. Very little in the way of equines, but they have made a model rocking horse with children. The company name was bought by Ackerman in 2001.

Rocking horses which were made in Devon. Traditional style in laminated polished wood or painted. The company began in the early 1970s and in 1983, they relocated to New Zealand.

English china company which made a model of Red Rum. It is assumed they are no longer in production.

Model horses made from real calf hide or leather over a wire and rubber-filled frame.  These were first made around the mid 1940s and over the years, many accessories were made, from riders, tack and rugs to hounds, stables and carts. The horses stood from 3 - 6" tall and were quite basic in appearance.  They ceased to be made in the late 1960s.

Miss Edith Reynolds first began making her model horses around 1944/45. She made them from calf skins filled with granulated rubber. Some were made from leather.  These models were stocked in prestigious London stores such as Harrods, Hamleys and Fortnum & Mason, as well as being mail order.
There were six sizes of horse available - 3" mascots, 6" small ponies, 7" larger ponies and 3 sizes for the horses (8", 9" and 11").  Various horse breeds and types were listed, such as Thoroughbred, Hunter, Shetland and Welsh Pony.   Each model came with its own set of tack and most also came with a rider.  Riders were of wire construction, dressed in suede and leather and had papier mache heads.  People were sold as "Huntsman", "Lady", "Police Officer" and "Military", along with "Young Rider" and "Gentleman".
Apart from the horses and their riders the range also included accessories such as rugs made from felt, wooden stables and carts, hounds and various other animals.
Edith Reynolds continued making her models until around 1967/68.  In the 1970's, Montague Arthur began making the same models and riders for a short while.  These are identical to Miss Reynold's horses but have the MA name on the belly label. 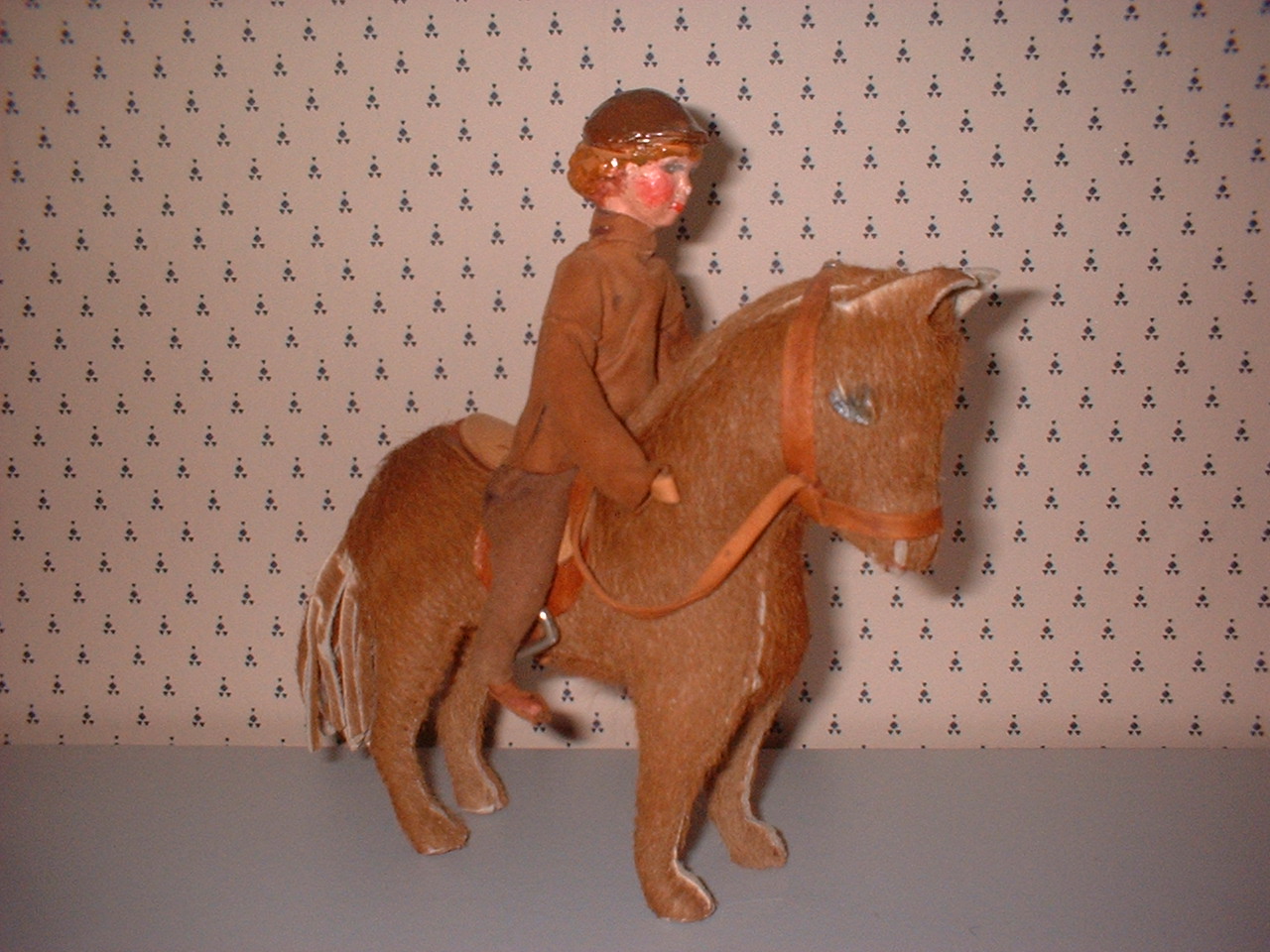 Sculptor who has had work produced in resin by Horsing Around. His models include a Highland pony, Poitou donkey, cantering pony and a Unicorn.

Resin models in a dark brown colour. A rearing pony was made. It is not known whether this company is still in production.

A company which made sporting models and trophies in the 1970s. There were several horses in gold, silver and bronze.  The company changed their name to 'Inca' in 1975.

Devon based pottery typically using a treacle coloured glaze. There was a 3" Shetland type pony in their range. No longer made. 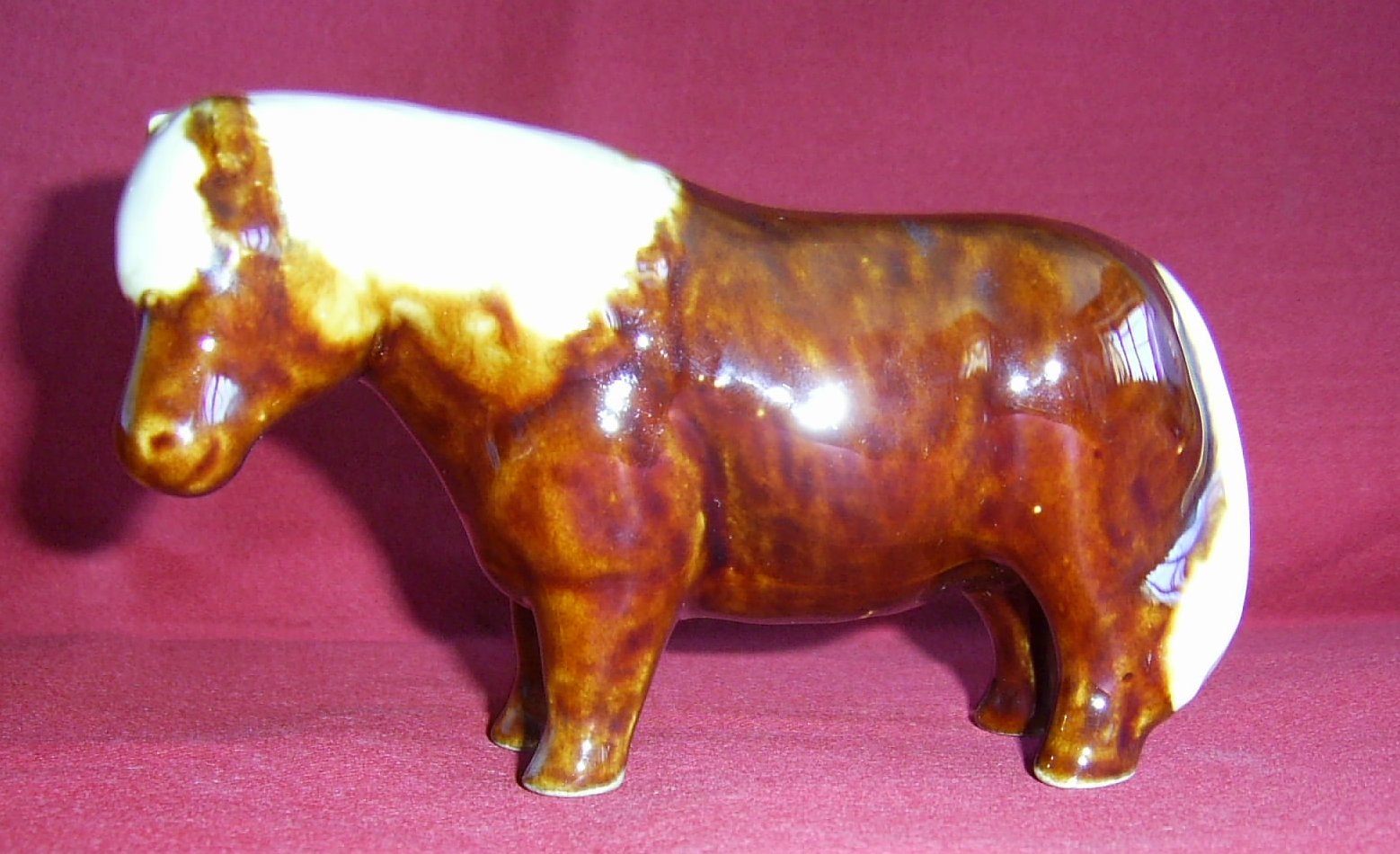 East Sussex makers of traditional horses. They advertised in the late 1980s and it is believed they are no longer in production.

York based maker Anthony Dew has been a maker of traditional horses since 1976. www.rockinghorse.co.uk

Victorian style horses based in Newcastle-upon-Tyne.

Shropshire made horses in the traditional style as well as more unusual equines such as zebras and Pegasus!  www.rockinghorseworks.co.uk

David and Noreen Kiss of Shropshire made Victorian and Edwardian horses in various sizes and designs.

Ceramic character animals made in Shropshire. Her 'Shelfies' range includes a sleeping horse in several colours. These are designed to sit on the edge of a shelf. There are also horse busts for ornament or trophies.  www.carolrogers.co.uk 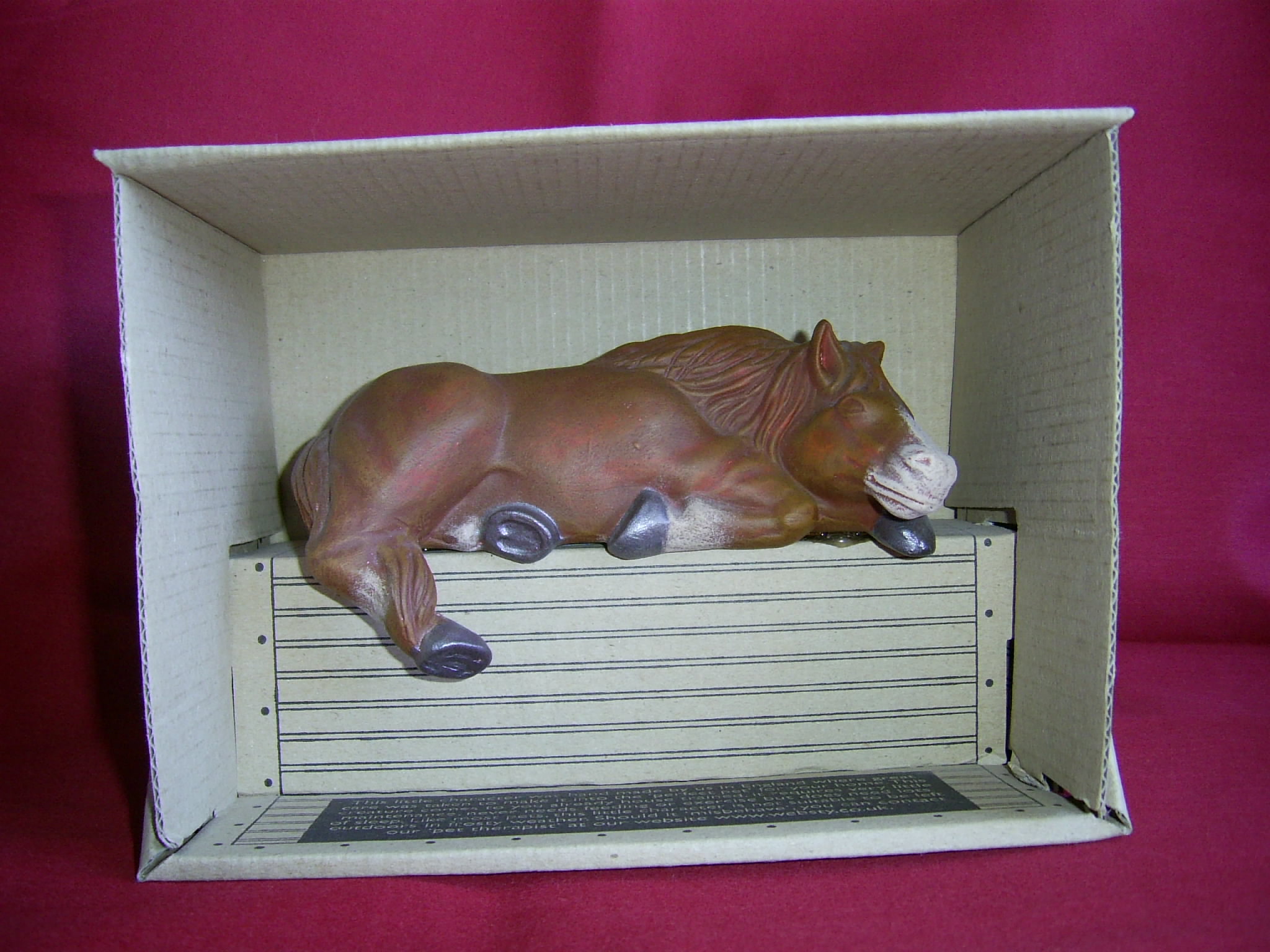 Model horses made during the mid 1960s by Harriet Rowe. These were made from silk covered frames and stood about 8 ½" high. They had hair manes and tails and were available in a variety of colours. They also had tack.

Bone china company established around 1894 in Staffordshire. They are more famous for their tea sets but have also made an 8" high china carousel horse in their popular 'Old Country Roses' pattern of decoration.  Not known if this model is still available.

Originally formed in 1750, this company have made a few horses in bone china. More recently, they are better known for their highly decorative paperweights.  There are several equines in this range.

This famous china company was founded in 1815 in London and moved to their Stoke-on-Trent location in the early 1900s. They have always had a number of equines in a variety of their series.  In 1989, they took over the production of the Beswick horses but this was relatively short lived.  They do still make a few horses from time to time.

Models made from sterling silver and pewter.  There were several equines made including heavy horses, mares and foals and donkeys.  The company was started in the 1970s and was based in Surrey.  The name was changed to 'English Miniatures' some time in the 1990s.

Fine bone china. They made a 4" high heavy horse decorated in a floral pattern. No other information.

Staffordshire pottery which had an 8" high standing horse in their range. No longer made.

Exquisite porcelain figures by some of the top sculptors, including Lorne McKean, Bernard Winskill and many by Doris Linder.  A vast array of breeds were available as well as sporting figures.  No longer in production.

Stoke-on-Trent company making bone china and earthenware models. There were dogs and horses available. It is not known whether they are still in production.

China models made on the Isle of Man. A heavy horse in harness was one of their range.  It is not known if they are still made. 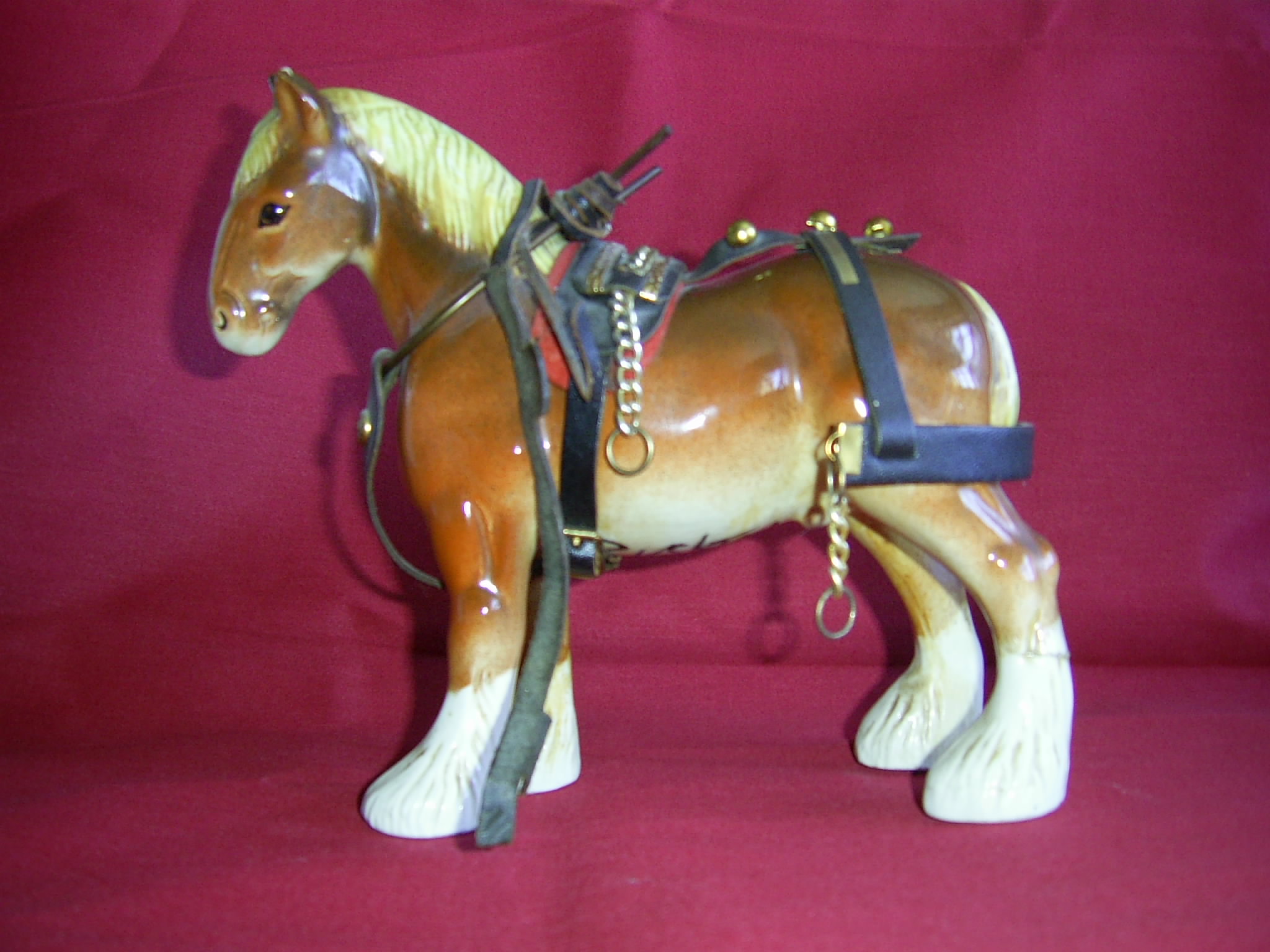 
Sterling silver wire models made by Mrs. A. Ryan of London in the mid - late 1970s. There were three sizes available, all made by winding the wire on itself.  No longer made.

Latex model horses made by the late sculptor Pamela du Boulay during the 1970s. There were two sizes of Arabs made, a mare, stallion and foal. Native pony breeds and a donkey were also made along with many accessories such as tack, rugs and riders. 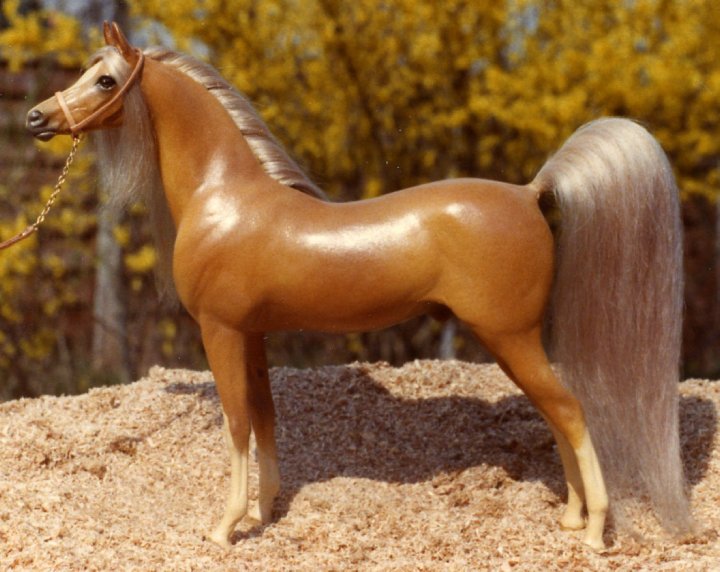 OF Rydal Arab owned by CJ

Established in 1869, this company has had a few horses in production over the years. Some are similar to the old Staffordshire flatbacks, some are stylised. www.ryepottery.co.uk