Gloucester rocking horse makers. Horses were made to customer's requirements.  Believed to be no longer in production.

Handmade and painted earthenware models.  Several horses were made including Shires, Cobs, Dartmoors and Welsh Ponies, all in stallion, mare and foal moulds.  No longer made. 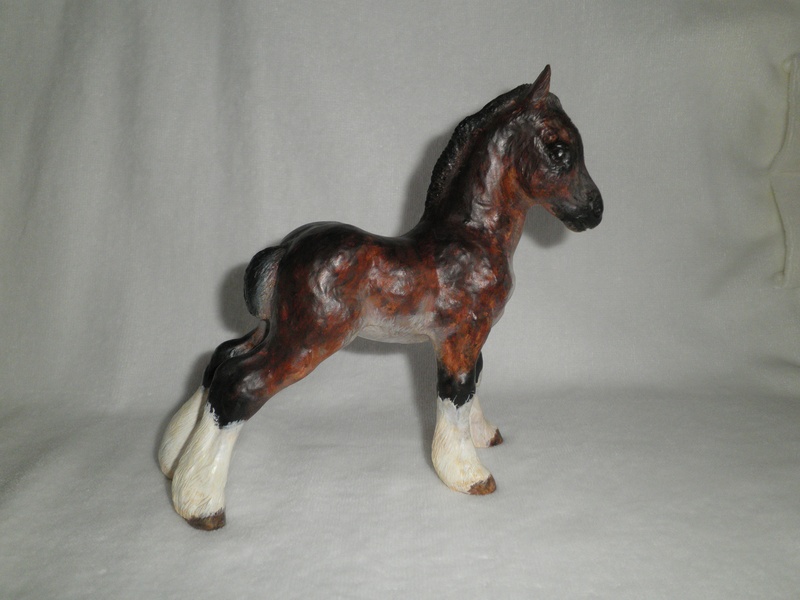 Scottish sculptor. In the late 1980s she made solid pewter models of dressage horses and show ponies for trophies and ornaments.  It is not known whether these are still being made.

Sculptor since 1996 specialising in animals in bronze and bronze resin. There are a couple of horses in the gallery.  www.hamishmackie.com

Scottish sculptor . He has made bronzes of racehorses and Arabs as well as bone china models.  www.tommackiefineartbronze.co.uk

Sculptor based in Wiltshire. There are some horses made in bronze.    http://www.nelsonandforbes.co.uk/index.php

Magpie models bought Dream Ponies in the late 1980s and continued to sell all the same plastic moulds but painted with more detail.  The company was sold on in the 1990s and became an internet based business.  Magpie was subsequently sold again in the 2000s and  was brought by Utterly Horses, they sold the company in 2015. The new Magpie Model Horses website can be found her:   http://magpiemodelhorses.uk/ 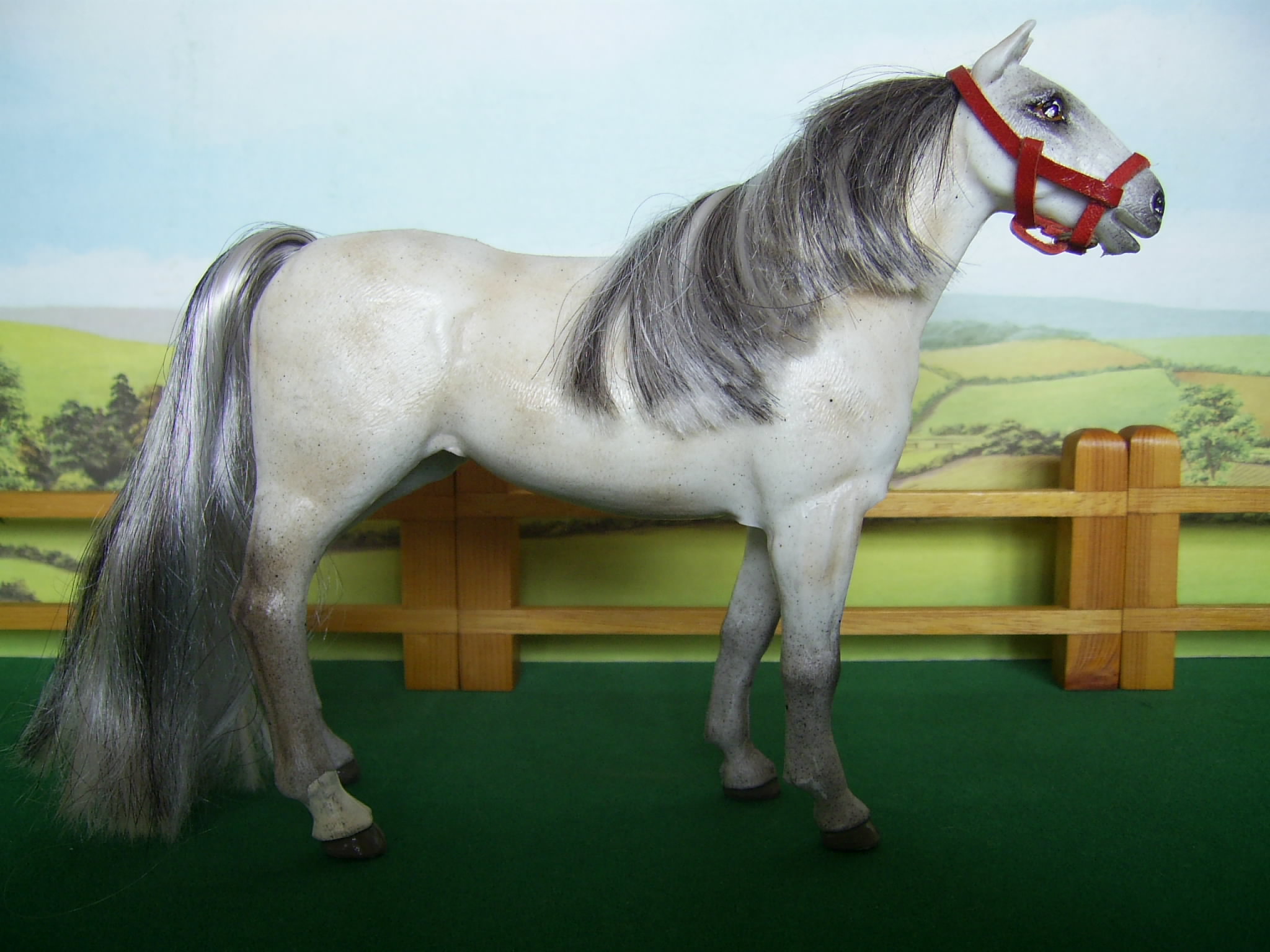 Pottery company which produced several horse pieces. They could be purchased ready painted or in bisque form to paint yourself.  They now appear to only make dog models.

Worcestershire company making china models by artists such as Rob Donaldson.  Many were limited editions and include famous racehorses and Shires.  Believed to be no longer trading.

Various plush- covered rocking horses by a company specialising in baby accessories. The firm was started in Yorkshire in the 1980s.

Hand crafted rocking horses made in Wales. It is not known whether they are still being made.

Company making plaster souvenir models. They started business in 1948 and closed down in 1987.  There were a few horses and foal pieces available, usually with the name of a town or attraction painted along the edge of the base.

Birmingham made English pewter figures mounted on wooden bases.  They made some horses such as Red Rum and Sefton.  It is believed these are no longer available.

Staffordshire china company.  There is a mare and foal on a china base in their range, as well as a foal on its own. There come in bay or grey.

Company based in Kent which produced a sculpture of a Lipizzaner in bisque porcelain by Sue Maclaurin.  This was available in the late 1970s and it is believed that the company is no longer trading.

Started in the 1940's, this studio potter produced stylised animals including several horses and foals until his death in the 1980s.

Some uncertainty around this name, as there appears to be two different types of models and it is uncertain whether they were made by the same person. One entry under this name is a potter, another was making miniature metal horses. Neither are still being made.

Sculptor based in Gloucester. He has produced a bronze statue of a trotting Welsh Cob which is on display in a Welsh town. He also has made several horses in resin that are produced by Horsing Around.   www.davidmayersculpture.com 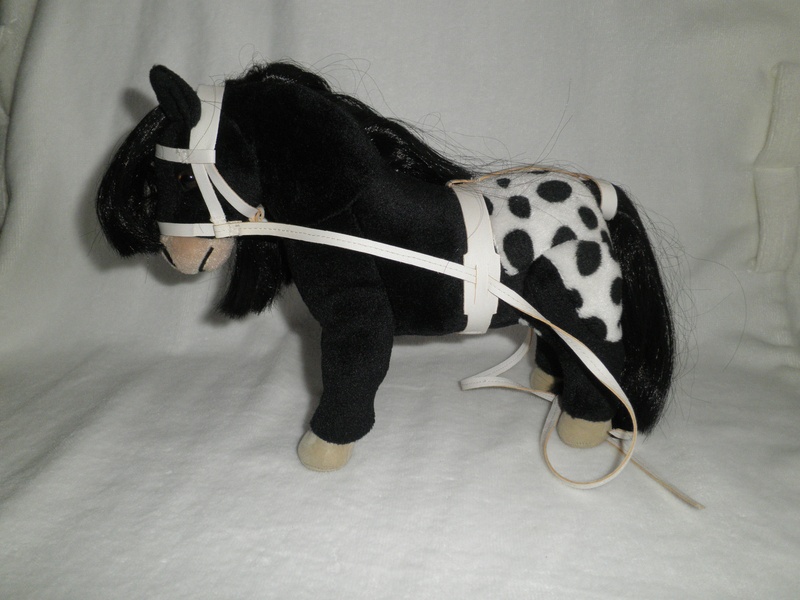 Sculptor and artist based in London and Scotland.  Her work includes a bronze of a Lipizzaner.

Porcelain animal figures by artist based in Hampshire. There is a lying pony in the range, about 3' high and available in any colour.

A Fellow of the Royal Society of British Sculptors.  Her work includes bronzes of polo and dressage horses. There are also some pieces in pewter.  www.lornemckean.com

Sculptor who has worked for Border Fine Arts and now produces her own work in earthenware, bronze and wood.

Norfolk sculptor working with steel and bronze. She has made a 7 foot tall steel Suffolk Punch and other horses of various sizes.  www.harrietmead.co.uk

Melba was a trade name used by H.A. Wain & Sons. They traded from around 1967 until 1984.  There were many china horses, mostly heavies in harness, but also donkeys, Thoroughbreds and Arabs. 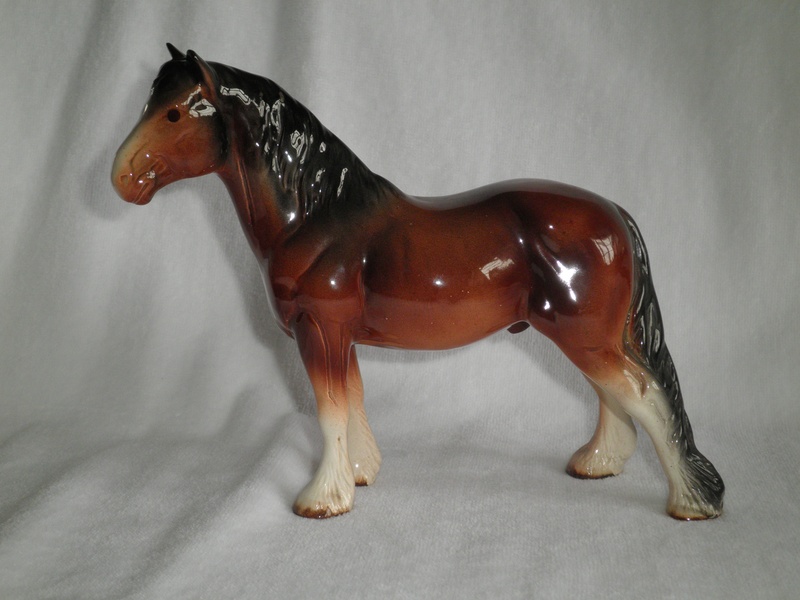 China models made in Yorkshire. There are some hunting figures which were previously made by Make 'n' Take Ceramics.

Stoke-On-Trent pottery company which was only around for the duration of the 1970s.  Their speciality was china heavies in harness and a few other types of horses and ponies. 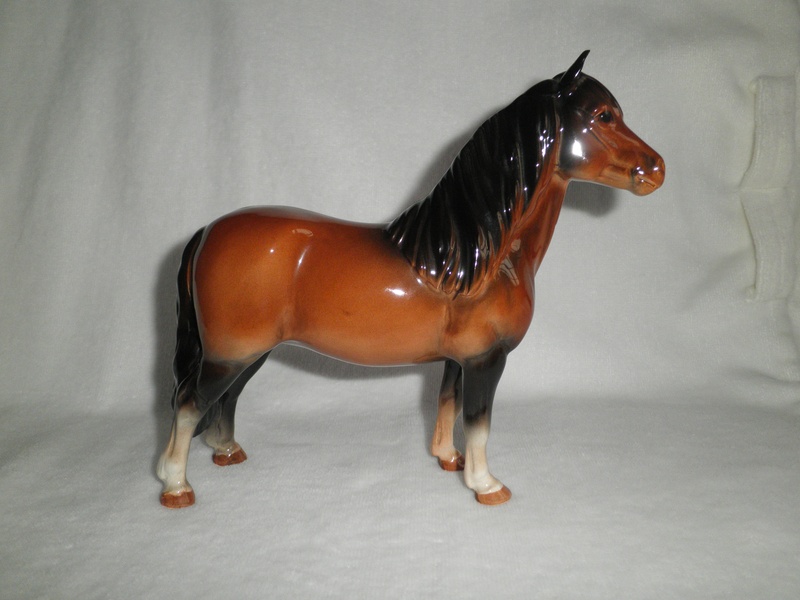 Another company making the ubiquitous china heavy in harness.  The thing that marks this company apart is the unusual painting on some of their models. The dapple greys could be quite spectacular with almost blue bodies being 'splashed' with white paint.  No longer made. 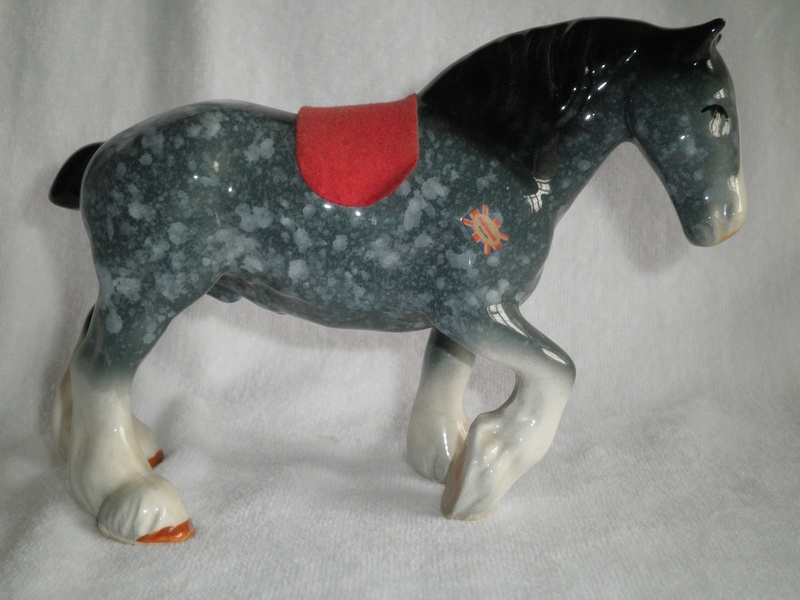 OF Melwood Heavy (minus harness)

A name used by Heredites. The resin horses and ponies were the same moulds that had previously been sold under the Heredites name.  There were also models made from china.

Model railway accessories which included horses and ponies in basic colours.  The company was renamed 'Modelscene'.

Pewter models made in Lancashire. Their range included a standing horse on a wood base. It is not known whether this company still exists. 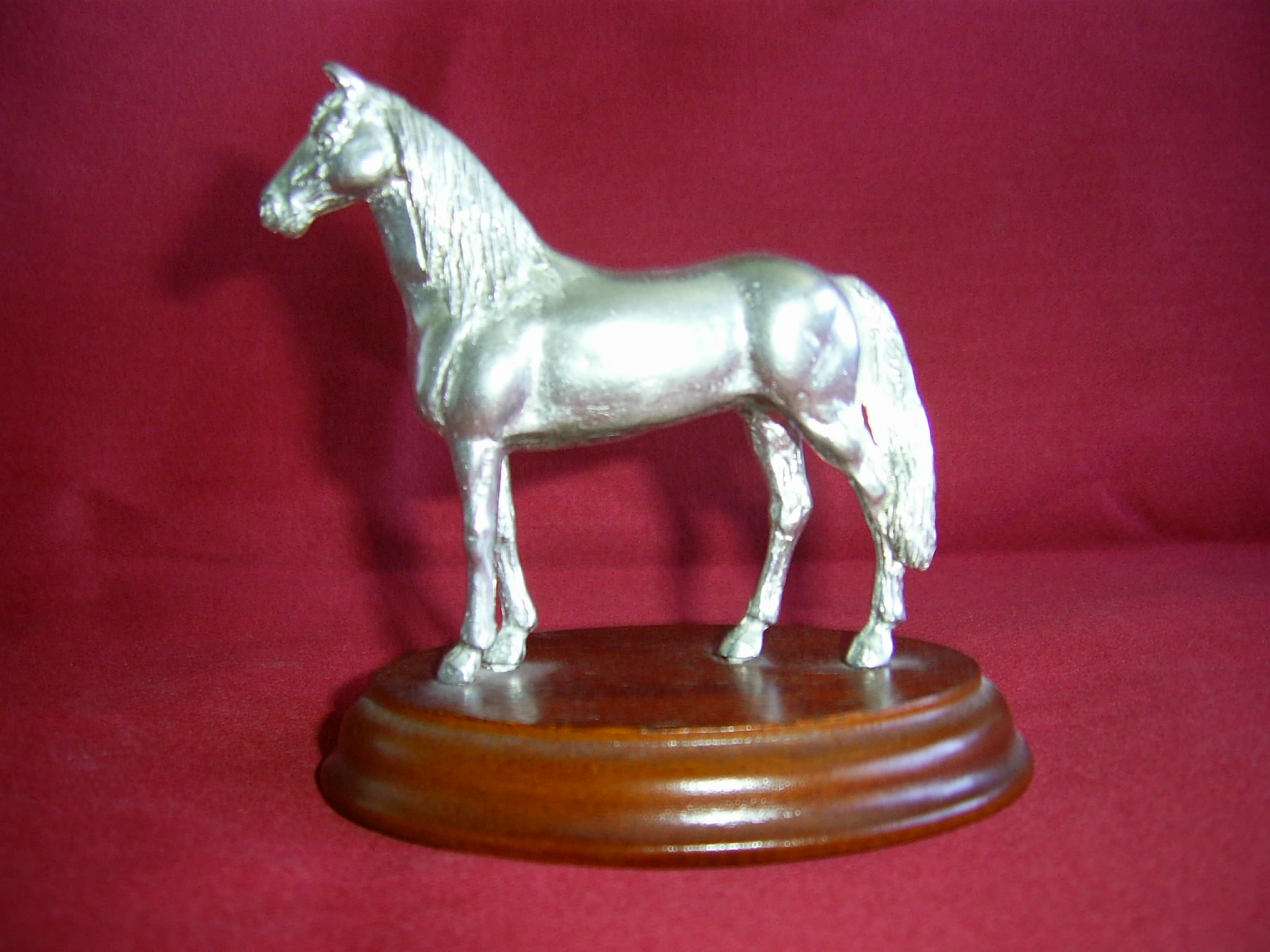 Rocking horses made in Cornhill-on-Tweed in the late 1980s. No longer made.

Famous soft toy manufacturer from Ironbridge, Shropshire. The company began in 1930 and is still trading, albeit as a much smaller enterprise.  Over the years they have made many push-along and rocking horses. www.merrythought.co.uk

Sculptor of bronze models and trophies. There are racing and eventing pieces in his gallery.  www.jontymeyer.com

Sculptor from Bath making cold cast bronzes, including a dressage horse in extended trot. No other information available.

W.R. Midwinter of Staffordshire were a china company producing mainly tableware but also some figures of horses over the years.  The company began in 1910 and closed in 1987. 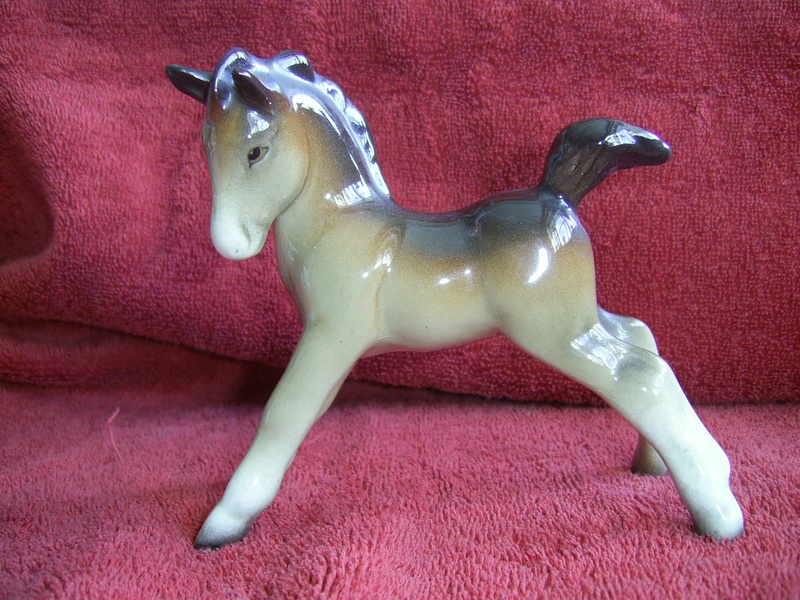 London based company producing cold cast bronzes by artists such as Amy Oxenbould and Helen Stoddart.  The company was trading in the late 1980s and may not be still running.

Hertfordshire sculptor who made a pewter model of a rearing Arab in the late 1980s.  It stood 8 ½" tall and was mounted on a wooden base.  No other information available.

Very famous fine bone china manufacturer which began in Stoke-On-Trent in 1793 and is still going.  Not noted for equestrian pieces, but there is currently available a china rocking horse in their 'Ultimate Childrensware Collection' series.

Toy company which began in Kent in 1947. They made tin plate toys including sit-on horses on wheels or springs.  The company ceased trading in 1972.

Railway model accessories with horses and ponies included in the range.

Scottish toy company which was trading around the 1970s.  They made the Mary Quant inspired doll 'Daisy', which had a couple of plastic horses in the range.  There was a dapple grey called 'Archie' and a palomino.  The same mould horse was also used for their 'Daredevil' series which included a cowboy and a bay horse.  No longer made.

Sculptor in bronze. A rolling horse was made in a limited edition of 12 pieces. No further information.

Mascots and trophies made in London. These were made of solid bronze which could be plated in silver or chrome. The horses available included polo players, hunters, Hackneys and racehorses.  It is not known whether the company is still trading.

Detailed felt models hand made by collector Laura Bond.  Markings and fine details are painted on.  There are portrait models made to order as well as occasional one offs for sale.

Latex models made in the early 1970s.  These were around 1/12th scale and only one mould was produced - an Arab mare.  Only about 6 models were ever made.

This artist began sculpting in 1995 and has produced models for Royal Worcester and Royal Doulton.  She has several bronzes available.  http://carolynmorton.com/

Sculptor. Made a model of a rolling pony.  No other information available.