Rocking horse makers. The company began in Oxfordshire in the 1960s and is still going strong.  The horses are unusual in that they are made from fibreglass. There are several styles available and are all made to order.  www.haddonrockinghorses.co.uk

Founded in 1952 as a toy importer, they began to manufacture their own brand in the 1990s. In 2010, the company was renamed HTI.  They have several 1:32nd scale plastic horses for farm and equestrian sets.

London jeweller and silversmith.  In the 1990s they produced a set of models consisting of 3 huntsmen on horses, a fence, hounds and a fox in silver with gold accents. It retailed for £17,000 !

Worcestershire sculptor making many equestrian models from bronze and silver.  Pieces include scenes of racing and polo. She is a member of the Society of Equestrian Artists.

Soft toy company founded in 1972.  They make realistic models from giraffes to rats.  Horses available include a prancing 'Clydesdale', unicorn, foal and several other horses and donkeys.  Some larger ones have internal steel frames to enable them to be sat on.

Pewter miniatures from the Highlands of Scotland.  The company started up in 1980 and is still running.  They produce tiny painted figurines that average 4 cms high.  There's not much in the way of horses but there has been a rocking horse and they are planning to make horses to pull their exquisite miniature coach.

In the late 1970s, this company made a cuddly toy version of Thelwell's Kipper in palomino.  I have no further information.

Based in the Cotswolds, this company started life in 1989.  They make miniature resin boxes mostly in the shape of animals. There have been several equine pieces over the years including racehorses and ponies.  www.harmonykingdom.com

Hand painted china.  Horses of about 4" high are included in the range. It is not known whether these are still made.

Ceramic studio in Stoke-on-Trent. Anita was a senior designer at Poole Pottery before embarking on her own project.  There are a couple of equine pieces made - a flatback scene with two horses and riders and a heavy horse. Both are in bright glazes.

English pewter hand painted models for display or trophies made in Leicestershire in the 1980s. There was a racehorse with jockey or a hunter and hound available.  Presumed to be no longer made.

Made limited edition sculptures. There was an equine piece made in the 'Spotlight On Nature' series.  No other information available.

Shropshire based company formed in 1982 known for their models of cartoon characters and 'Doggy People' range.  There was a selection of 7? high rocking horses made from resin, in various colours.  There are no equines in their range at the moment. www.robertharrop.com

Soft toy maker from Shropshire. There were a few cuddly ponies and hobby horses made.  No longer in production.

Sculptor producing models of racehorses. Her work includes Desert Orchid, made for Country Artists and Kauto Star, Denman, Sea The Stars and others.  www.racehorsesculptures.com

China company that made a model of the Duke of Wellington's horse Copenhagen. Mounted on a marble plinth.  I have no further information.

London jeweller and silversmiths. They had exclusive models made in silver, including a horse about 1 ¾" high.  Believed to be no longer available.

Shropshire based sculptor.  Her work includes many horses in bronzed resin. Her business called Toric trophies was sold on in 1999 and now she mainly makes portrait models, especially of native ponies.

Maker of plastic toy soldiers and several horses which was bought over by Britains in the 1950s.

Bronze resin figures by artists such as David Geenty, Doris Lindner, Peggy Alexander  and Rob Donaldson.  Heredites began in the 1970s with their cold cast resins, which now appear to be made in Ireland at Genesis Fine Art.  They also produced a series of china models under the 'Charm of Creamware' name. 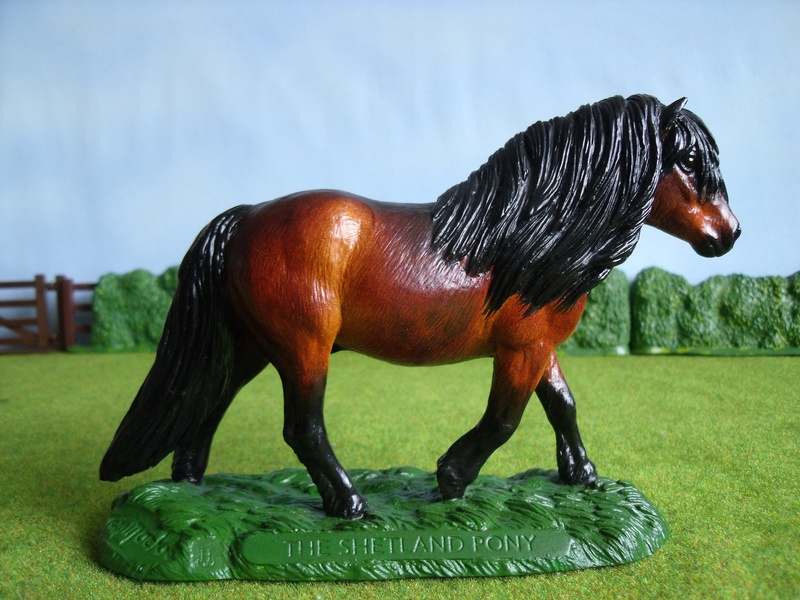 China sculptures by artists including Amy Oxenbould and Geoffrey Snell.  The company ceased trading in the early 1980s.

Resin and cold cast bronze models of racing and hunting figures. Around 5" in height, there was also a model of a heavy horse in a stall and a lady riding side saddle.  No longer in production.

Maker of miniature wooden rocking horses from Shropshire. In the 1980s, he made a range of 1/12th scale horses.  No longer available.

London toy company in the 1970s and 80s.  They made the S.R.L. Army Heroes series of 4" high soldier dolls and accessories, which included a plastic bay horse.  No longer in production.

Sculptor based in North Yorkshire. Working with bronze, silver and gold, she has made several equine pieces from racehorses to show ponies.  She now only makes equestrian jewellery.  www.sculpturetowear.co.uk

Hand painted porcelain animal models, averaging about 3" high.  Located in Lochgilphead in Scotland. In the 1980s and 90s they made a piebald pony.  The company appears to still be operating but it is not known if there are any equines in the range now.

Makers of 25mm war gaming figures, including several heavy and light horses.  They are all made in white metal and are supplied unpainted.  In 2008, Hinchliffe were acquired by Hinds Figures Ltd. But the name remains the same.

Metal 1:32nd scale figures. The range included a set of a painted heavy horse with a boy and girl titled 'Friends'.  It is not known whether this company still exists.

Hertfordshire sculptor who made several bronzes of famous racehorses in the 1970s.  Among them were models of Red Rum, Grundy and Night Nurse.   No more information available.

Resin models made in Staffordshire. They made the 'Fables' range of unicorns and Pegasus models in the 1990s.  There were a handful of other equine pieces of mares and foals and Shetland ponies.  Believed to be no longer made.

British sculptor who now works mainly from the USA. During her time in the UK, she made several large and life sized bronzes of horses.  www.susannaholt.com

Kent based toy company famous for their model railways.  They also made plastic model horses to accompany their 'Cassy' and 'Flower Fairy' ranges of girl's toys.  No longer available.

China company which made vases with animal themes. The company was started in 1949 and ceased trading in 2000. Their range included a posy vase with a pony lying at the foot called 'Horse At Trough'.

Stockists of many Resin and Bone china model horses by sculpted by various artists from the UK and abroad. www.horsingaround.com

Rocking horses made by Geoff Martin.  They appear to be no longer in production.

Felt model horses made in Leicestershire. About 4" to the withers, they had wire frames covered with felt and had wool manes and tails.  It is not known whether these are still in production.

Sterling silver models made in Manchester.  In the early 1980s, a model of a hunt scene was made with huntsman, horse and three hounds, all mounted on a wooden base.  It was made as a limited edition of 250.   It is not known whether the company is still trading.

Leicestershire company which used to be known as Casa Roma.  They made soft toy pony pyjama cases.  It is not known whether they are still trading.

Glass models made around the 1980s.  They made a very stylised horse in several colours. Believed to be no longer made.