Studio situated in the South Devon town of Dartmouth.  Established in 1947.  They produced mostly simple giftware including bookends with a mare and foal. Not very realistic.  The company is said to still be trading.

Somerset based sculptor. In the early - mid 1980s he was offering portrait sculptures on various models such as racing figures.  Believed to be no longer trading.

Hand made clay models by collector Judy Faulkner in the mid 1970s.  A handful of these models were made from air drying clay with wire skeletons.  No longer available.

Reconstituted stone garden sculptures made in Coventry. Some horses were included in their range, such as a rearing stallion on a plinth.  Believed to be no longer available.

China models.  They made a lying pony in a blue/green glaze. No other information available.

English porcelain hand painted miniature animals.  Their range included a matt grey donkey, approx 2" high.  It is not known if the company is still in existence.

Sculptor from Scotland, working with bronze, resin and porcelain.  He has worked for companies such as Clermont in the past. He has produced a porcelain sculpture of the Queen's Cleveland Bay 'Mulgrave Supreme' and various breeds in resin. Rob sadly passed in 2011.

Bronze models of animals made in Peterborough in the 1980s. Included in the range was a 'Sleepy Foal' mounted on a wooden base.  Not known if still trading.

Rocking horses made in Salisbury. These were advertised in the 1980s and seem to now be out of production.

Company from Cambridgeshire making a range of soft toys called 'Soft Touch'. They make just about any creature you can think of from giraffes to spiders!  Included in the range are several horses, ponies and donkeys. They are made of high quality materials and are superior to many makes.  Available on the internet or in good toy stores.

Makers of Britains-style diecast figures. The company has produced some horses for military figures but also some for a hunting scene with horses, hounds and a fox.  It is thought this company is still around.

Polystyrene plastic model horses made in Colchester, Essex. The company started trading in 1971. These were basic coloured models supplied unpainted with extra long manes and tails. The idea was for the customer to trim the hair to their preference and paint on their own markings and features.  Masses of accessories were also available, from riders and tack to stables and carts. Six models were made - the Hunter, Arab, Welsh, Donkey, Shetland and Foal.  These could even have flocking put on them to give them a furry feel.  The firm was bought over by Magpie Models in the 1990s. 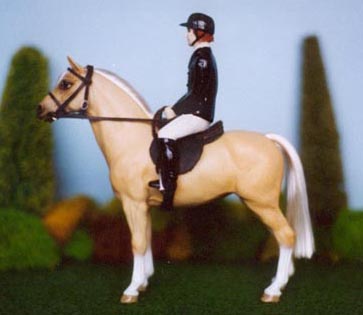 OF Dream (Magpie) Arab - Rider and Tack CMed by Owner

Cornwall based pottery studio. There were donkey and foal models made. No further information. 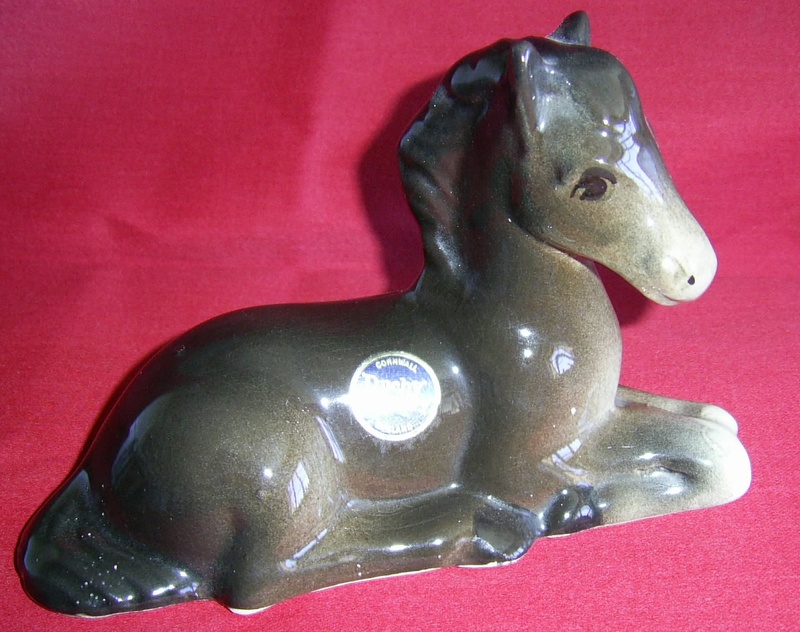 Cold cast bronze resin sculptures of animals. All hand painted. Based in the West Midlands. No further information.

Hand made resin animal models made by P.J. Dutt of Barnstaple, Devon.  These were small pieces, all hand painted and quite cute. They were around in the 1980s and it's uncertain if they are still made.

Sculptor working with bronze and cold cast resins. She has worked on several life and larger than life sculptures including Grand National winner Amberleigh House. She has pieces in the range of Genesis Fine Art.