China models made in Torquay, Devon. The company was founded in 1947 and had been sold a couple of times through the years, latterly to Philip Laureston Designs.  It appears the company lasted until 2002.  They had a limited number of horses in their line.

Sculptor based in the West Midlands. She specialised in cold cast bronze figures and had several horse pieces. It is not known whether any are still being made.

China models made in Wales. I have seen a lying foal in their range . It is not known whether this company is still trading.

Maker of animal sculptures from resin. There was a pony available in 2 sizes and in a variety of colours. No longer made.

Sculptor based in Surrey. She has made several equine pieces. Unfortunately, I cannot find any further information.

Birmingham company which made hand-polished and lacquered brass ornaments, including horses with carriages and caravans. Believed to no longer be available.

London maker of intricate models of horses and carriages in the early 1900s. Everything was carved from woods such as cedar, with leather harness and tack.  There were hunters, thoroughbreds and carriage horses.

Sculptor working with wood and stone. Ann trained at Leeds College of Art and is a member of the Society of Equestrian Artists. Her work can be viewed at www.equestrianartists.co.uk

Cold cast bronze resins. Some equines are available, including a Shire in gears sculpted by O. Tupton.  These are available in gift shops and internet sites.

Barnsley based maker of models. The medium used is unknown but they were hand painted in acrylics. At least one horse was made and was available in the early 1990s. It is doubtful these are still made.

A London based toy manufacturer from 1953 - 1965.  Apart from cars, they made lead farm animals which included several horses.  They were of a similar scale and style to the early Britains models.

The world famous china manufacturer founded in Stoke-on-Trent in 1894 by James Wright Beswick and his sons.  In 1969 they sold to Royal Doulton and this was when most of the horse models were made.  Doulton eventually sold the Beswick arm of their company in 2002 but the name has continued in one form or another ever since and as of 2008 has been owned by John Sinclair. New horse and pony models are being added each year. 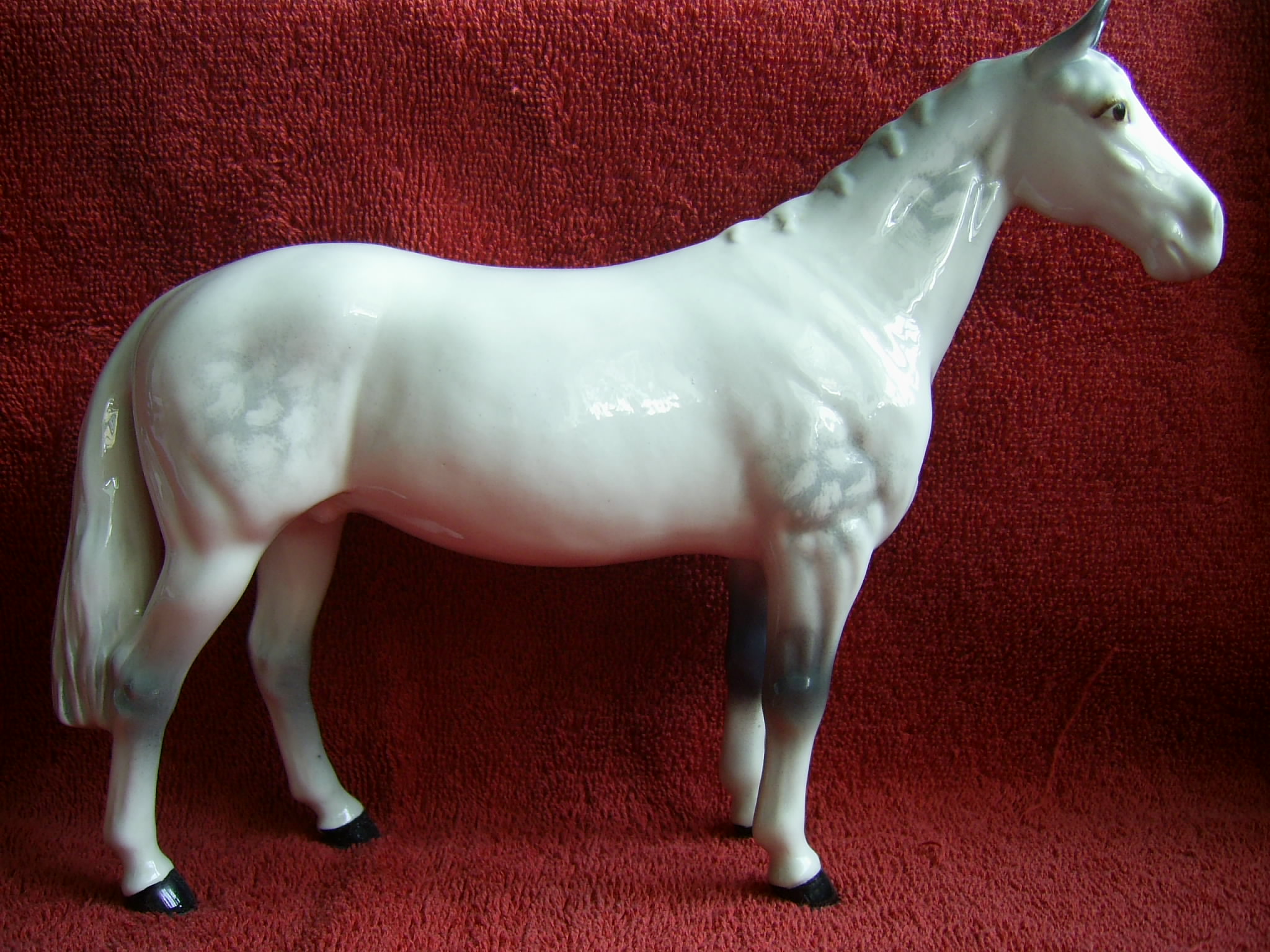 Small Devon based craft studio making plaster models and gifts. A lying donkey was made.  Believed to be no longer trading. 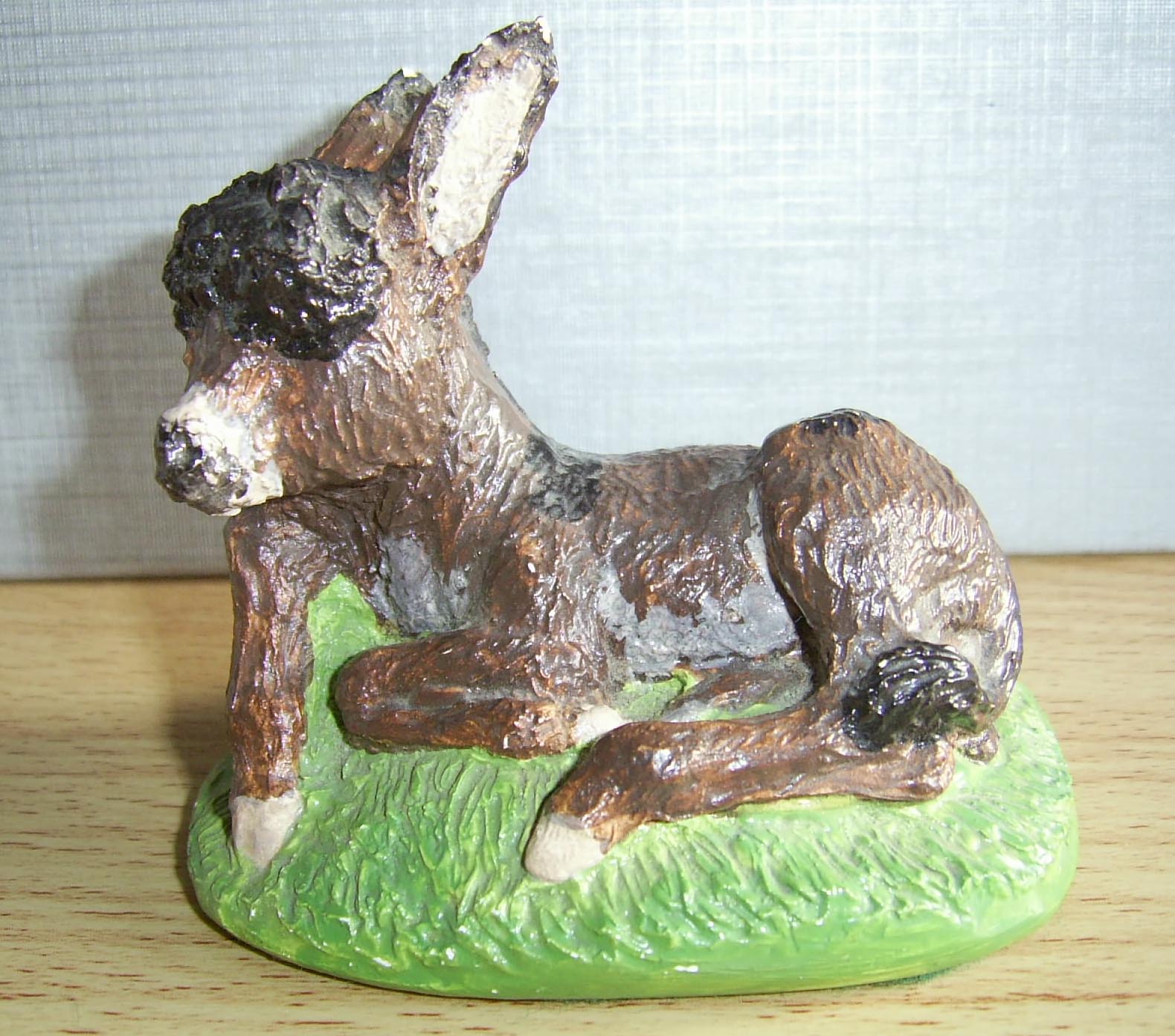 Sculptor in bronze. She has produced many equine pieces including mares and foals, thoroughbreds and a model of Whistlejacket from the famous Stubbs painting.  I have no other information.

Former jockey turned sculptor. Has made many hunting and racing pieces.

Another former jockey turned sculptor!  Based in Oxfordshire, he works in bronze and produces many equines from life-size to mini models.  www.philipblacker.co.uk

London based company which produced models in cold cast bronze.  A limited edition sculpture was made of the Queen mounted on Burmese.   Believed to be no longer  trading.

Clay horses and ponies made by model collector Andrea in the 1980s.  No longer in production.

Toy company which began in Swindon in 1980. They made the 'Oh Penny!', 'Polly Pocket and 'Amy's Horse Tales' ranges which all had plastic horses.  The company was taken over by American giant Mattel in 1998.

Agricultural journalist and sculptor.  Mr. Booth lived in Suffolk and sculpted in bronze and unusual mediums such as brass rods.  Horses made includes Welsh Cobs and Thoroughbreds.  He died in 1978.

Well-known manufacturer of resin models based in Cumbria. BFA was founded in 1974 and makes many country and equine related models and scenes.  Artists such as Anne Wall and Judy Boyt have sculpted their many horses and ponies over the years. Company ceased trading in 2016. 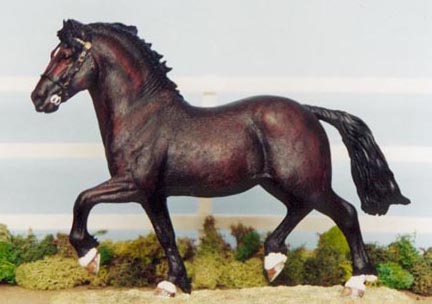 This Congleton company is most famous for its chalk 'masks' and wall plaques. Between 1972 and 1989, under the Briar Rose name, they made a small range of plaster animals which included a lying Shetland pony and a donkey. These were made to resemble rosewood and were a reddish-brown colour.

Well-known sculptor of horses. She has produced models in bronze and latex (Rydals) and lately her work has been made available in bone china and resin. She has sculpted horses for  Franklin Mint - Black Beauty, Flicka and the Red Pony were all Ms du Boulay's work.  Pamela sadly passed in April 2022. 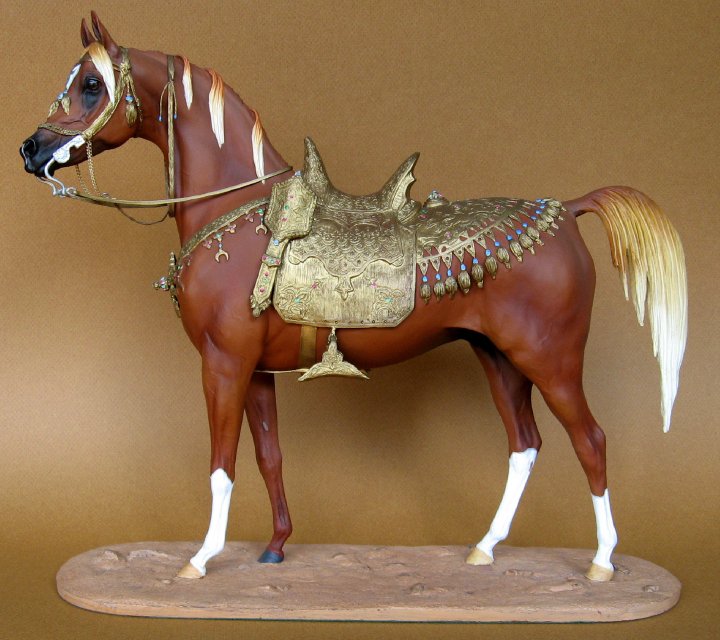 Pottery company from the Scilly Isles.  Colourfully glazed models including a lying foal.

Based in Worcestershire, this company make detailed miniature animal and bird figures from materials such as bronze, pewter, precious metals and ceramics. Only one equine is made at present - a donkey called 'Jock'.

Well-known sculptor working with bronze. She has produced many horse pieces from full-sized statues to trophies. See her work at www.judyboyt.com

Founded in 1935 by the Baggaley family in Bournemouth. They mainly produce kitchen ware, but have made various horse figures over the years.

China company founded by Henry Tooth in 1883.  They are more famous for their vases but several horse figures were made including heavies, ponies, foals and mounted hunters. Hounds and foxes were also made.  No longer in production. 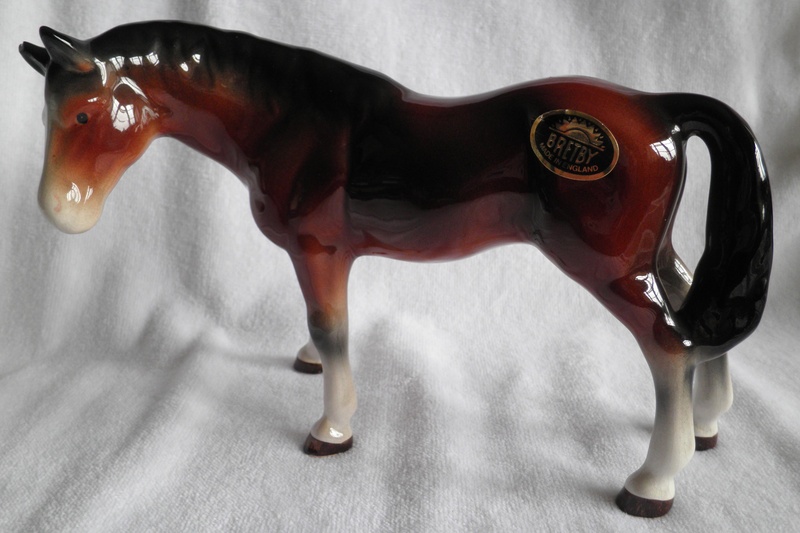 Founded by William Britain Jnr in 1893 and known as W. Britain, they made hollow cast lead toy soldiers.  In 1907 the company became known as Britains Ltd.  Lead model production ceased in 1966 due to safety laws and was replaced by plastic.  Many horses were made, mostly for their farm and cowboy ranges.  In 1984 the company was sold and was then known as Britains Petite Ltd, then sold again in 1997 to American company Ertl.  The Britains name still continues and still makes horses in various styles. 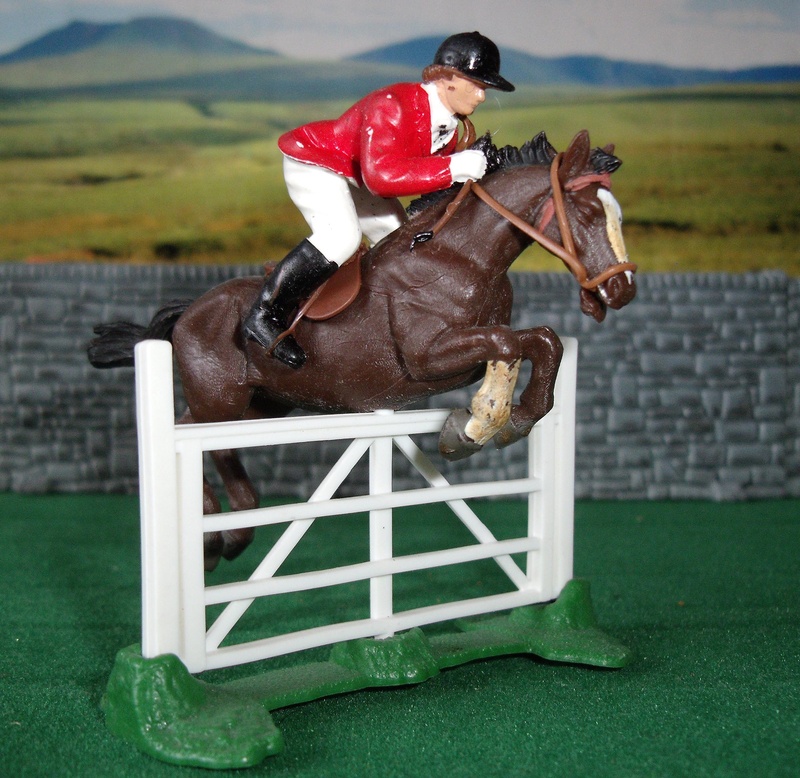 Based in Malvern, Worcestershire, this maker of high quality porcelain sculptures began life in 1996.  Their small range of horses include racehorses and a model of 'Balmoral Curlew'  for the Queen's 80th birthday.  Their pieces sell in excess of £10,000 each !

Sculptor based in Devon. Works in bronze and iron resins.

Diecast toys made in England.  They were producing toy cars but also had a horse and carriage in their range.  No longer made.

Hampshire company which made 54mm scale models of racehorses, hunters and show jumpers.  These were made from metal and hand painted. Models of Desert Orchid and Red Rum were available along with many others.  Made in the 1990s and believed to be no longer in production. 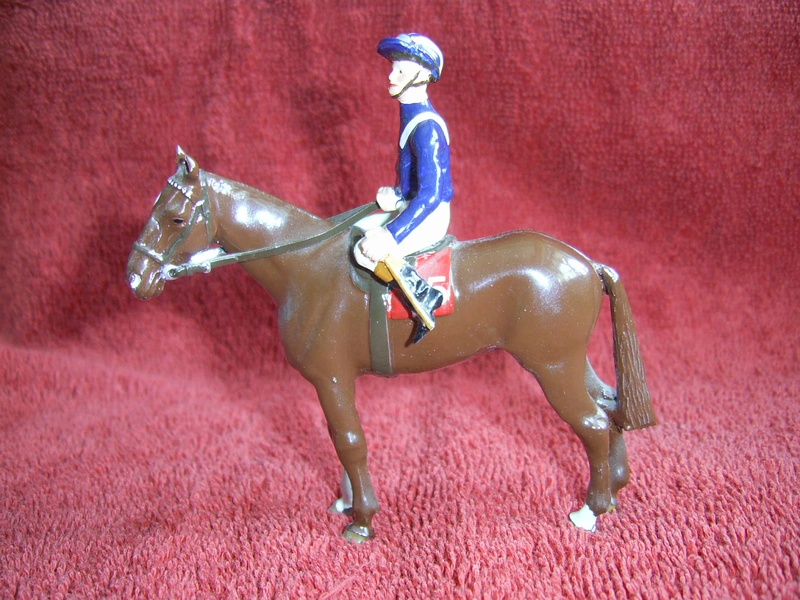 Clay models made by a sculptor in Devon. Several breeds of horses and ponies were available in various colours.  No longer being made. 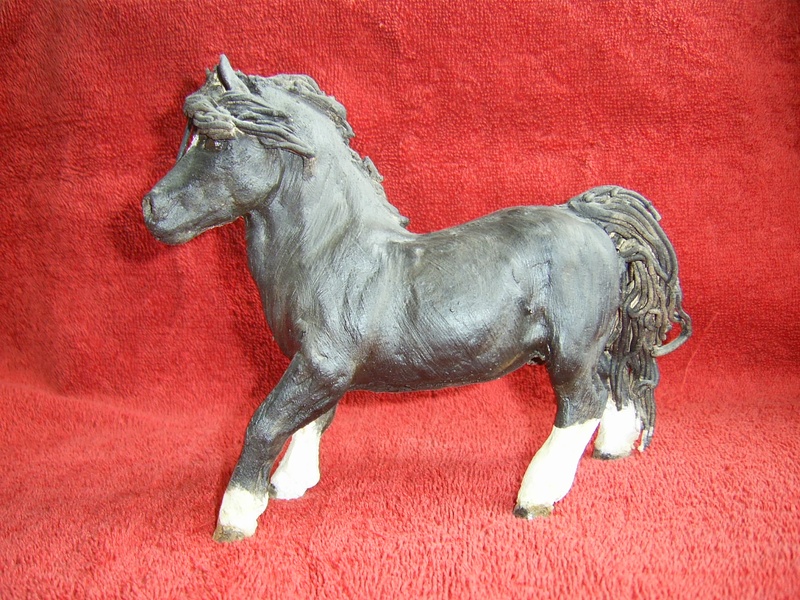 Sculptor based in Somerset producing horses in bronze and resin.

Sculptor in bronze and resin specialising in Arabs.  Anne is British born and lived and worked here for many years but is now living in America. She is included in this list as many sculptures and resin models were made during her time in this country. www.jannebutler.com

English pewter 1/32nd scale kits including horses with carriages.   Not known if still made.