Introduction to 'The Hobby '

A Basic Introduction to the Hobby

Model horses come in a huge range of materials and sizes. The 4 most common materials are plastics (of various types), ceramic (china) resin (including 3D printed) and latex. Manufacturers whose names you may already have come across include;

Unlike many hobbies, there is no standard scale for model horses, but the three most popular sizes are known as;

Whatever the material or size, models are divided into two categories:

There is no stigma attached to collecting and showing OF models, in fact a good OF is always preferable to a bad custom! 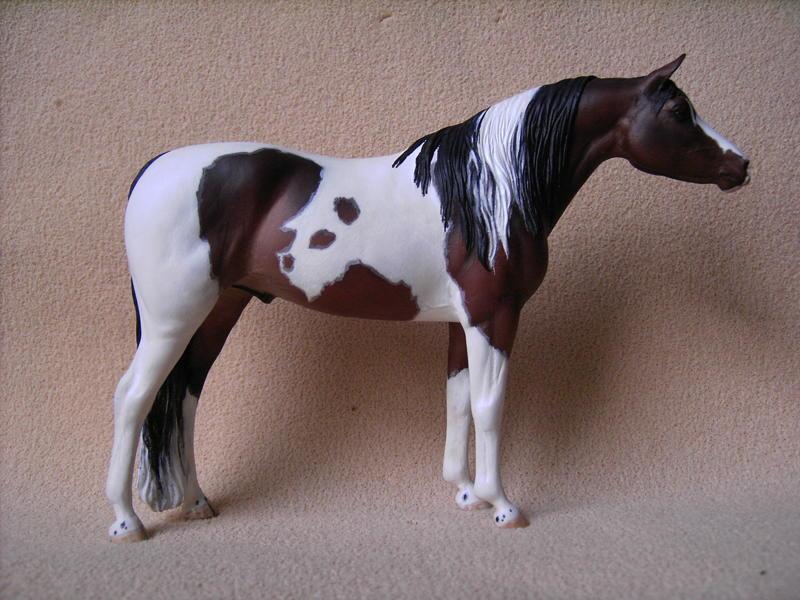 A variety of models can be purchased over the counter, ranging in size and expense from the ever-popular Britain's plastic farm horses to limited edition resins and ceramic sculptures. Additionally, there are a number of firms such as Breyer, Animal Artistry and Copperfox who can supply models via mail order .

There is also a large and thriving second hand market, which may allow you to buy models that are no longer available commercially.  Nearly all hobby groups and webpages carry 'for sale' adverts: though most of these are honest and genuine, it is always as well to take care when contacting sellers you may not know.  If you are interested in a model, contact the seller and ask whether the model is still for sale, and if any photos are available for you to see.  Once you are satisfied with the appearance of the model, you then send your payment.
Always try to send it by PayPal or via a cheque or postal order (cash is too prone to being lost in the post.)  If by chance the model is not as advertised (damaged, perhaps, or not even the same model!), ask for a refund, and return the model once you have received your money back.  On the other hand, if the model reaches you and you are happy with it, it is nice to then drop the person a note to say that you are pleased with your model and that it has arrived safely.  Common courtesy costs nothing, and will get you far if you ever have to deal with this person again!

Before you buy a custom, it is advisable to become familiar with the work of the various artists. If possible, go to live shows, and see which models appeal to you, and which look well finished.  Also ask around and see which artists have a good reputation.  It is sometimes tempting to think that a model advertised at a very high price must be something special, but this is not always the case. Probably the best way to buy a rework is from an artist's production list, you are guaranteed to get a new model straight away, and if by chance you are not happy with it, most artists will offer a refund.

Alternatively, you can always commission a model: though you will get exactly what you want, you may have to wait quite a while for it (several months, or even a year or more), as most artists customise models during their spare time.  You can always buy customs second-hand, but it is as well to be careful as they are prone to damage. However, most owners look after their customs, mainly due to the amount they cost to buy.  Always insist on seeing current photos before you part with your money.

Some second hand models may come complete with their own set of details: if the vendor specifically states that they have to be kept, you must respect their wishes.  If you can't/don't want to do this, don't buy the horse.  If no such proviso is made, you are quite within you rights to give it a new identity: however, this may still be frowned upon if the model is particularly well known, has been around a long time, or was bred from other models.  If in doubt, ask around first.

Where to find Tack and Accessories

Breyer sell both Traditional size riders and tack, but most people prefer to make their own tack, as Breyers is not totally realistic, and can be rather expensive.  Breyer also sells a range of accessories such as jumps, which offer rather better value to the novice hobbyist.  Other firms make tack to suit their own models, and there are many hobbyists who also sell tack/kits etc. in various scales.  'How-to' information for those who want to take the plunge and make their own tack is regularly featured on the various hobby groups and websites.

A trip around a car boot sale often provides useful dolls for riders in a variety of scales. MEGO dolls (articulated dolls like Action Man, identifiable by the MEGO stamp on the back) make good Traditional riders, and can wear some Breyer outfits, but any doll with ball-joint hips can be used, providing it is in proportion to the horse.  Sindy, Barbie and other similar fashion dolls are usually too large or disproportionate for most makes of models, but wire framed 1/12 scale dollhouse figures can be used with classic-sized models.

They are also a great place to find items like small flower pots and 'prop' items, sometimes you may be lucky enough to find fences and hedges from children's farmyard sets that work well for backgrounds and prop building.

Part of the fun of model equine collecting is finding identities for your models.  It is accepted convention in the hobby that models, as well as having a name, also belong to a breed, and have other 'vital statistics' to suit - date of birth, parents, (normally either real horses of appropriate breed or existing models - in the latter case, with the owner's permission, of course), height and sex.  Colour and markings will naturally already be established!  These 'details' as they are known, are usually considered an indivisible part of the model throughout its 'life' in the hobby.  It is therefore important to make sure that the details are appropriate for the model as, for example, a model of a Shire type that is given the details of a Shetland will never look right.

The subject of breeding is one that newcomers to the hobby often find a little difficult at first, and admittedly it does sometimes take rather a leap of imagination to grasp it!  Essentially, many hobbyists run their collection as a stud - or several studs specialising in breeding specific types of horses or ponies.  All models from these reputable breeders will be given parents that trace back to real horses of that breed, just as if they were genuine flesh and blood descendants.  The actual 'breeding' itself is all done on paper, with each model mare being assigned to a particular stallion in a particular year, and eleven months later producing a foal (which may be shown as a foal model, or may remain on paper as just a set of details until it is assigned a model body).  Breeders normally retain a pool of foal models, which they distribute between mares every year, the previous foal's details being re-assigned to an adult model body.  Breeding is a fascinating subject, and one that often gives the hobbyist great understanding of real horse pedigrees and genetics.

There are four types of shows and events in which your model can compete: postal shows, photo shows, online photo shows and live shows.

OFs, Customs, and Resins - especially minority breeds, can and do compete together, but at larger shows, you may find a separate division for each type, with its own championship structure, thus assuring all kinds of models are judged on their own merits.

Postal shows are normally judged by chance - you enter your models details together with an SSAE for return of results if held by post, (Postal Shows are held via email too) as well as any entry fee (if required), and the show is judged by the 'raffle' method.  In addition to more general shows, there are postal events such as racing, show-jumping, eventing, dressage and so on.  These are frequently judged by more sophisticated means - model Thoroughbred racing, for example, takes into account the horse's suitability for the distance and going, its previous form and other factors to find the most likely winner of the race.

Photo shows require you to send a good clear photo of your model - with suitable tack and rider for ridden classes - to be judged.  The model is then judged, as with a real horse, on its conformation and breed type.  The only exception is in the collector class; where condition, rarity and collectibility are the deciding factors.  When entering a photo show it is not only vital to include an SSAE large enough for the return of your photos and results, if the show is held via the post, but also to ensure that the model's details, and your name and address are written clearly on the backs of the photos, to prevent them from going astray.

Online Photo Shows are very similar to Photo Shows but instead of posting your photographs to the showholder you upload your models digital photos onto a host website such as Smugmug, Facebook or one of the dedicated model horse showing websites. As the entrant you will need to upload your digital pictures onto the host website, as per the showholders instructions, they will give you the details needed such as the password and any rules you need to follow such as the entry fee, image size and max amount per person per class limit. Results are normally emailed to you after the show.

Live shows are the hobbyists chance to get together and meet for a spot of friendly competition!  Normally held in either a local community hall, or if a small event, at the show-holder's home. A live show gives your model the opportunity to get out and compete in person!  They are also a great way to make friends in the hobby, as well as giving you a chance to buy new models and accessories.  Most live shows also provide rosettes and awards, so you may even be lucky enough to take home a souvenir of the day!